The Podere Cannicci team braved the heat today to continue the work undertaken during the previous afternoon. The students centered in the area excavated during the 2017 and 2018 seasons endeavored to fully remove the brown clay of Context 36 in the extended portion of the excavation to expose a burn-layer, characterized by charcoal, dark red clay, disintegrated bricks, and an abundance of pottery fragments.Several iron objects, including nails and a hook, were found in the process of reaching this layer. Further, this context seems toboth cut beneath rocks that appear to be a continuation of wall 8and to be consistent with the burn layer within Room I exposed in 2018; since this room has accumulated clay between the excavation seasons, the team’s next task is to bring the charcoal-laden clay back to the light and confirm or deny its consistency with the newly uncovered context residing in Room I. In the other direction, it is also possible that the hypothesized wall formed different stratigraphic basins between Rooms I and V, so the following days will be marked with an investigation of the context’s continuation towards the southern end of the site. The possible continuation of the wall itself will likewise be articulated, and other, curiously aligned stones will be investigated over the coming week.

The team at Area 1000 likewise worked on the contexts unearthed during the previous day, particularly Context 2, defined by charcoal, disintegrated brick, yellow and grey clay, all which find parallels in the aforementioned soil reached by the other team, as well as the presence of dolia, and Context 3, a brown layer with visible inclusions. Context 2 heralded numerous finds, including iron nails, dolia sherds, a tile with a maker’s mark, a bronze object, and ceramic sherds of interest. In the morning, Dr. Edoardo Vanni taught the students working in the trench with him to use Total Station, create maps, and properly employ context sheets—documenting and taking points of Contexts 2 and 3 and the charcoal lines likely demarcating wooden beams; then, they set to work removing Context 2 and the scattered sherds of dolia while retaining the bases and those sherds in situ in the belief that the team has reached the floor.They plan to continue articulate those dolia in situ, confirm the floor, and remove Context 3.

On either side of the trees, the excavators at Podere Cannicci have begun the work of understanding both the pervasive existence of charcoal-laden clay at the site and the interaction and functional separation of these nearby areas. There is still much work to be done, but the team welcomes the plethora of questions and conjecture arising from our discoveries. 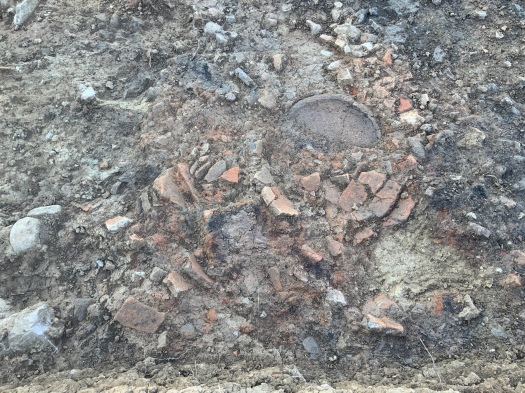