Today at Podere Cannicci, the team continued to peel back a layer of stones and collapsed brick in Room 1, picking up where they left off on Monday. The somewhat complicated stratigraphy in this area made for delicate work as a layer comprised of orange streaks of disintegrated bricks and charcoal-laden red clay (Context 56) had to be distinguished from a partially contiguous, partially overlapping layer of stones and whole bricks (Context 59). In the process, bronze slag and plenty of pottery were found, Kevin found a bronze coin, and Michael found loom weights. The work of cleaning the now exposed walls continued along walls 57, 58 and a new unnumbered wall, making sure not to go too deep or remove the red soil of Context 56.

In the adjacent area, Tina and Thuraya continued to trowel away through Context 2 and its northern extension. The collapse surrounding a row of dolia, large earthenware vessels for storage and transportation, was then removed, beginning with dolia number 1. While clearing away the sherds of the dolium, a mistake was made in removing the dolium base itself. The bases are generally left in their original place as they can be expected to have remained immobile since antiquity. The sherds of the upper portion of the vessel, on the other hand, are easily displaced (in the event of a collapse, for example) and may be removed along with the rest of the context laying on top. Thus, the collapse of the dolia belongs to the context above (Context 11) as opposed to the context of the bases, each of which is given its own designation – so, for example, dolium 1 = Context 12.  This simple mistake was no great reason for concern as the base of the vessel could easily be restored to its position in situ. At any rate, the situation of the dolia in Area 1000 was a good learning opportunity. In the following days, soil samples from each dolia context will be sent to the archaeo–botanist for analysis. 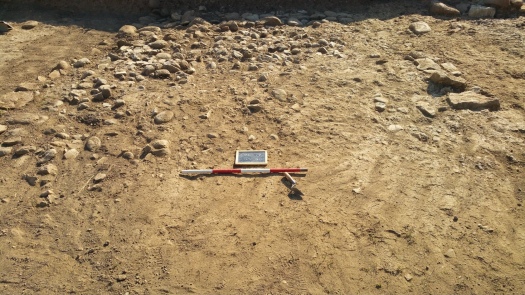