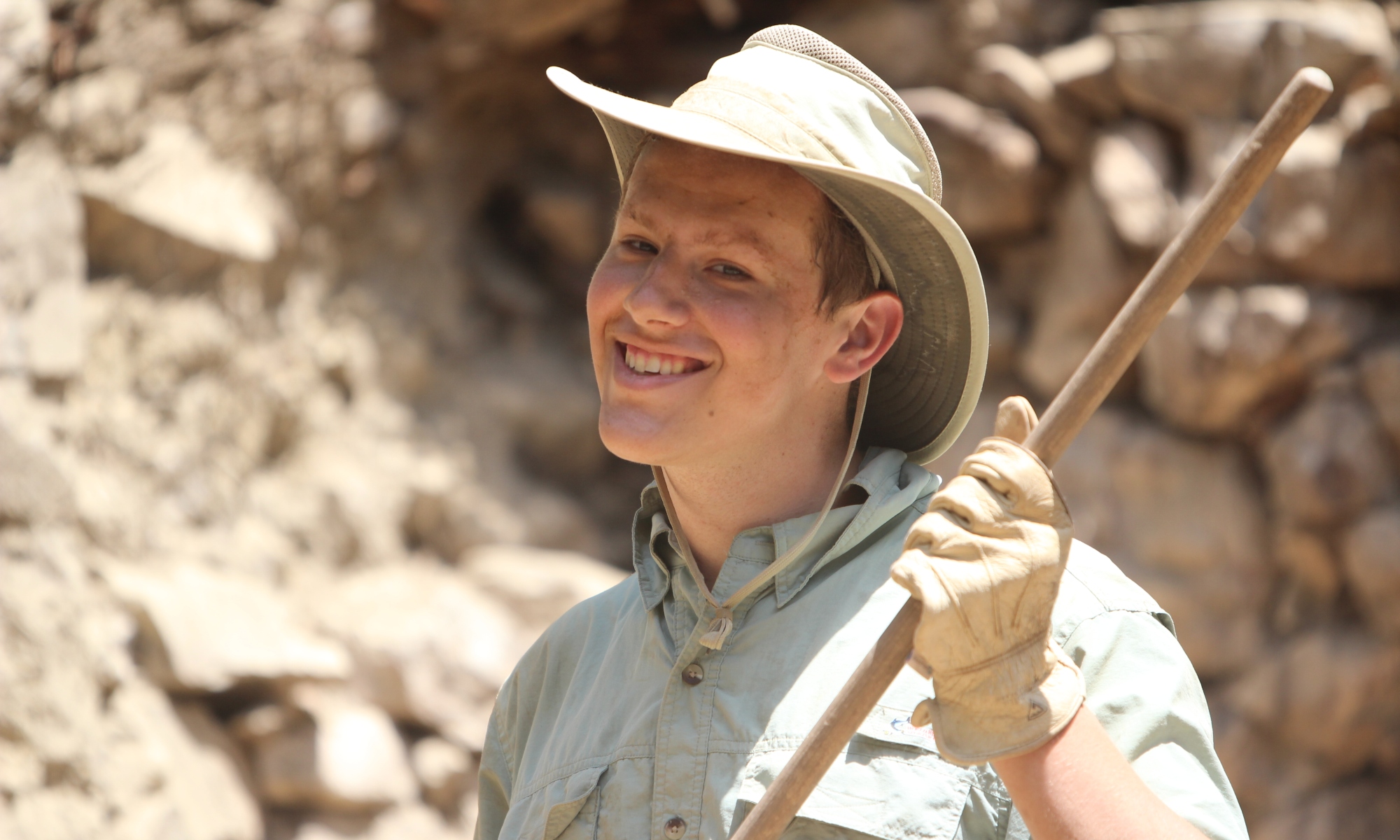 Grant is a soul wiser than his years, distinguished by both intelligence and kindness, both a deliberate presence and an acceptance of the spontaneous. With one leg crossed over the other, the aura surrounding the twenty-one-year-old anthropology, with a focus in archaeology, major at the University of Arkansas was simultaneously secure and guarded for being in a place so far from home, lacking a compatriot from his own locus in the United States. In defiance to environmental change, his security seems to stem from within: unapologetically, though incredibly respectfully, open about his wants and feelings, Grant was aware of his own capabilities both on site and off, recognizing his own worth as well as the strengths and dispositions of others.

Despite this strength and quality of leadership, however, the presiding and protective role that Grant took up amongst his peers this past season was unusual for him, differing largely from the dynamic that he shares with his three sisters, two being older and one younger than himself. “I always try to look out for my friends,” he explained as he remarked on the uniqueness of the atmosphere that the field school fostered, which differed even from the social groupings of the team sports that Grant played in high school or from those among his coworkers, and look out for his friends he did—Whether on the streets of Florence taking headcounts or helping his fellows on site, this anthropologist exemplified his care for others and his ability to mediate situations to ensure the best outcome for all. Having only been out of the country to Spain and Paraguay with family, Grant adopted this strange role with ease and bore his unfamiliar situation with awareness and amiableness towards the unknown. Even when he had left the United States before, being surrounded by the familiar sounds of his accent prevented him from feeling singled out as different; at Monteverdi, surrounded by Americans hailing from different parts of the country, he was immediately made aware of his distinctiveness within the group, particularly through others’ dwelling on his speech, but this position never prevented him from becoming beloved by all those around him or from forming new bonds with effortlessness.

As if testament to the encroaching of the new, a strange insect, pink arms extended, crawled across the table towards him as we spoke, sparking laughter between us; however, the realm of the untrodden acts as the center of Grant’s focus on a larger scale than the things that momentarily capture his attention. On the one hand, his goals consolidate the singular dream of adventuring to far off places, to better complete his experience of the world: With certainty in his eyes that he would someday see much, much more than he has so far, Grant explained that he still does not know what his favorite place is because “he ha[s]n’t been everywhere [that he] want[s] to go,” including Greece, first and foremost, as well as all of Europe. “Travelling is all I’ve ever really wanted to do, so I’ve just been trying to find ways to do that,” he clarified: Over wealth, over all else, “[I want to be] happy with where I’m at, content in life. That is…number one on the list.” With discovery and joy intertwined, all other pursuits exist as stepping-stones for Grant to grasp the life that he desires.

At first, a different path appeared to carry him to this conclusion: Although he “like[s] problem solving” and enjoyed his computer science and engineering classes in high school, “the goal with computer science,” his original major, was largely to have enough money to travel the world. In his third semester, however, Grant found his calling: “I was already…so tired of math [and turning away from] engineering…I took Intro to Archaeology as an elective and absolutely loved it, so I decided to change.” Although the student, in his rational disposition, recognizes the aspects of the field in their entirety, both positive and negative, this change of path has proven to be fun and stimulating. A curious mind who has loved history and has adored the book series Percy Jackson & the Olympians ever since he was young, Grant is finally embodying the passions of his childhood as his career path, shaking off the lethargy that came with pursuing a field more for the future producible from it than the labor itself.

Grant’s relationship to this future in flux is, simultaneously, one of the only real sources of fear for him. Just as he was pushed towards Greek history and thus towards archaeology by his favorite book series, which he “read…so many times that the pages are…falling out,” every further experience with the study of human life and archaeology in particular has moved him closer to carving a pathway for himself out of the unknown. After leaving computer science behind and switching to anthropology, Grant was pushed further into the field by Professor Rhodora Vennarucci of the University of Arkansas whom he met while taking a course on Latin; Dora, as he fondly referred to this team leader of the Podere Marzuolo project, then led Grant to the door of the IMPERO Project—his next stepping-stone towards a life of adventure molded from a well-rounded knowledge of the past. In fact, one of the central reasons for his embarkation on our field school was to have this trip aid him in decisions regarding his life after graduation, to see whether he would like to pursue archaeology immediately through graduate school, to take some time off, to work in cultural resource management (CRM), or perhaps, to abandon this path entirely as work unaligned with his skills and interests. Although the field school did not give him a definitive answer to these questions, Grant assured that his participation in it has helped him greatly. By delving into the labor with equal and even greater fervor than the moments of fun, travel, and relaxation surrounding the workday, the undergraduate forced himself to recontextualize his schooling, to dwell on his choices and desires, and “to figure out what [he’s] going to do for the rest of [his] life.”

While daunted by and contemplative of this impending future, Grant simultaneously carries pieces of his past and home with him as he adventures into the unknown. From the familiar heat of his origin state where has spent the whole of his life, he embodies his father’s teachings and encouragements to work hard, and on site, he continued his “enjoy[ment of] going to work and working with people”; from the mountains and trails of Fayetteville where his university resides, he carried to Monteverdi his love of peace, the outdoors, and the rolling hills. Affirming that “relaxing is [his] favorite thing to do,” Grant described the continuity of his places of comfort: Just as he unwinds in his hammock on campus, this lover of the little things found similar tranquility at Monteverdi, lounging and reading in the lawn chairs scattered across the green space that descends to the residence’s edge before these pockets of quiet were moved to the poolside.

Thus, the unfamiliar is more akin to the uncanny for Grant, finding in this home away from home the reenergization of his longest-held interests. This co-existing, somewhat contradicting dynamic is furthered paralleled in how this student sees the world, finding interconnection between unfolding, disparate moments in time. Hoping to focus on the Mediterranean region that has captured his heart, his focus often lies on the reverberations of the past into the present: “I love history, so I like [a perspective of the bigger picture,] looking at…how this event that happened somewhere 300 years ago is now affecting this area over here today.” Simultaneously, just as he is able to occupy potentially paradoxical social roles, Grant’s paradigm likewise incorporates foci on the smaller scale: “I also enjoy digging up little things in the dirt such as coins,” he mused, laughing about finally finding some ancient currency after he had been waiting to join his peers in their similar excitement. He seemed at home in reconciling these different points of view, just as he was unburdened by wearing different hats among his peers or by contextualizing the old in the unfamiliar, for regardless of what an environment asks of him, Grant always has his laughter. It is this laughter that I will always remember him by, with his eyes slightly squinted, deep in thought, navigating these different temporalities and their impacts on both himself and on the world, or nearly in tears over silly conversations told to the wind in the back of a moving van—always as full of strength and sureness as he is filled with warmth and kindness, always as ready to lead others through the unknown as he is grounded in the familiar, and always as brooding on the things that matter as he is brimming with laughter.