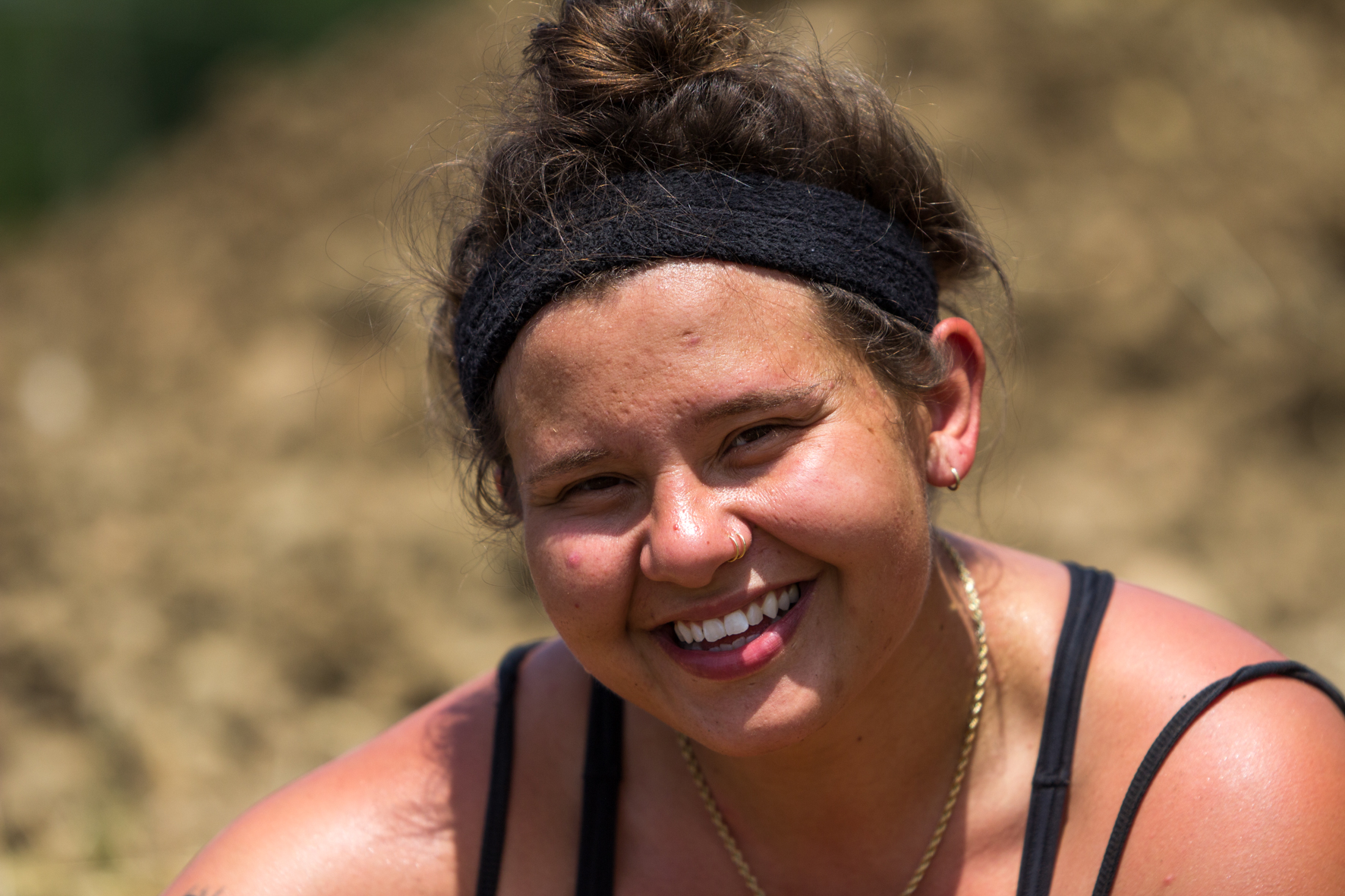 Tina was not entirely keen on being interviewed until she realized its conversational and genuine nature, and this very response to structure and pre-determination attests to her deep authenticity that saturates her in every context and allows her to feel and express herself at any moment, having “never really cared about what people thought about [her].” Although she cites her rawest self as residing in her moments alone, where she can dwell on her internal complexity and recharge, this rawness of solitude is present even in her public self: Tina’s brown eyes often sit brooding to the rhythm of cigarette inhales; often she leaves the commotion early to spend time browsing “Instagram videos of dogs” before the onset of sleep in order to avoid the conflicts that come with night. This fearsome independence that expresses itself in every decision made alone and every beer bottle self-sufficiently opened on the blunt side of a trowel is one of the many factors fueling Tina’s ability to step back from the movement of the crowd, constantly thinking critically and staying true to her ethics. Her personability, however, likewise contributes to this ability. Tina radiates with a wisdom that surpasses her twenty-nine years on this planet, and just as she finds her relationships made both on site and off to better correlate with every person’s core rather than their age or even necessarily their experiences, her powerful empathy allows her to understand people quickly and wholly and to provide them with support. Her sympathetic kindness, her easy-going, humorous nature, and her authenticity come to life in her constant laughter and the continuous joy she instills in those around her; her pride and meticulousness in her work, her brilliance, and her desire to better herself likewise fuel the respect that all members of the IMPERO team have for her.

This budding scholar completed her bachelor’s in Anthropology and Classical Archaeology after a life in the world of fashion, buying and renting out clothes, that she has since left behind. Born and raised in Long Island, which she has memorialized in a tattoo on her arm, Tina moved out from her mother’s house to live in Queens, New York, when she was eighteen. She had been raised by her single mother and grew up with her grandparents; now she carries her grandmother’s openness to others, her mother’s lessons of independence, and her Italian heritage’s emphasis on familial and communal ties with her in her excursions abroad and her move to the city. Prompted by the death of her father, Tina decided to go back to school and to experience a field school in Italy—changing the course of her life towards a culture with a more substantial and aware relationship to the surrounding world. Now applying for graduate school, she knew from the beginning of her embarkment towards education that she wanted to be an Etruscologist—to penetrate an esoteric subset of the already privileged field of archaeology.

As Tina leaned against the bench under the Tuscan sun, she spoke of the lucky circumstances necessary for students to be able to undertake such an experience and how an acknowledgment of this can easily be lost by those same students, particularly when surrounded by such beauty. Tina, on the other hand, “know[s] what it’s like to work…[and] learned a lot about life very early,” asserting this as she reminisced on her first moments living alone; therefore, while drama often spurs between the members of any dig, Tina is aware that “this is so temporary…[and that all should] just…try and live with everyone and enjoy it…if a problem arises, you do the adult thing and talk to the person first.” Just as her return to education and success in school were based in deliberate action rather than expectation, “something that [she] thought about and…wanted to do as opposed to something that [she] had to do,” Tina’s behavior in the social world is likewise direct and conscious; while this may, in her opinion, make her appear to be “rough around the edges,” she asserts: “I’m… a thinker, too, and a loner…I think people take that as being stand-offish, but it’s not.” She simply knows herself and her needs and lives by and promotes those needs on both a macro and micro scale, whether urging communication or taking one’s time in earning a degree in order to study what one truly wants, and she appreciates deeply every opportunity that she has and continuously moves forward “to do better and be better.”

In her own journey of following her desired field of study, Tina first dug an Etrusco-Roman site and then necropoli, including the site of Crocifisso del Tufo in Orvieto, Italy. She is drawn to the Etruscans because of their elusiveness: “Herodotus says they come from Lydia, everyone thinks they come from Turkey, a breed of cow here…[is] an ancient breed from Anatolia…but for me, it was more the interconnectivity aspect…how the Etruscans were interconnected with the near East, and I think it’s important to study those things because it gives [these people] a voice.” She described, with a mixture of sadness and fervor, the predominance of elite, white men in Etruscology and Classics; “interconnectivity,” on the other hand, “brings more of the world into the history because it is there, it just hasn’t been paid attention to because Classics has been such a privileged field, an elitist field…The more people who study gender in the ancient world, who study interconnectivity in the ancient world, can bring a better rounded-out picture of what the ancient world is, and that’s a world of people from everywhere interacting in good and bad ways…and the Etruscans are a good place to start.” In particular, Tina highlighted the gap between the abundance of artifacts left by the Etruscans and the lack of known context in order to understand them, marking this as an important point for further study; moreover, she seeks to challenge our understandings of the conflict with and the conquest of these people, advocating, for example, ideas of continuity and bricolage over a narrative of “becoming Roman” during “Romanization” of the Etruscans and other peoples—likewise drawing upon contemporary studies of imperialism, colonialism, and diffusion. Through her research interests, her position as a woman, and her desire to teach, Tina hopes “to be one more person who adds to research that is inclusive research” in a field that she believes “will die” if other “young people and especially people of color feel excluded.” She continued by stating: “if I can inspire other people who are not your ‘typical classicists’…[even] just one other person, it would be worth it to do.” In a field where women “have to work ten times as hard as [their] male counterparts [to be told] that [their] work is mediocre” and marginalized people of both the present and the past find themselves excluded from major narratives and recognition, Classics needs this determination: Tina’s presence, passion, strength, and authenticity foreshadow coming change and new horizons.