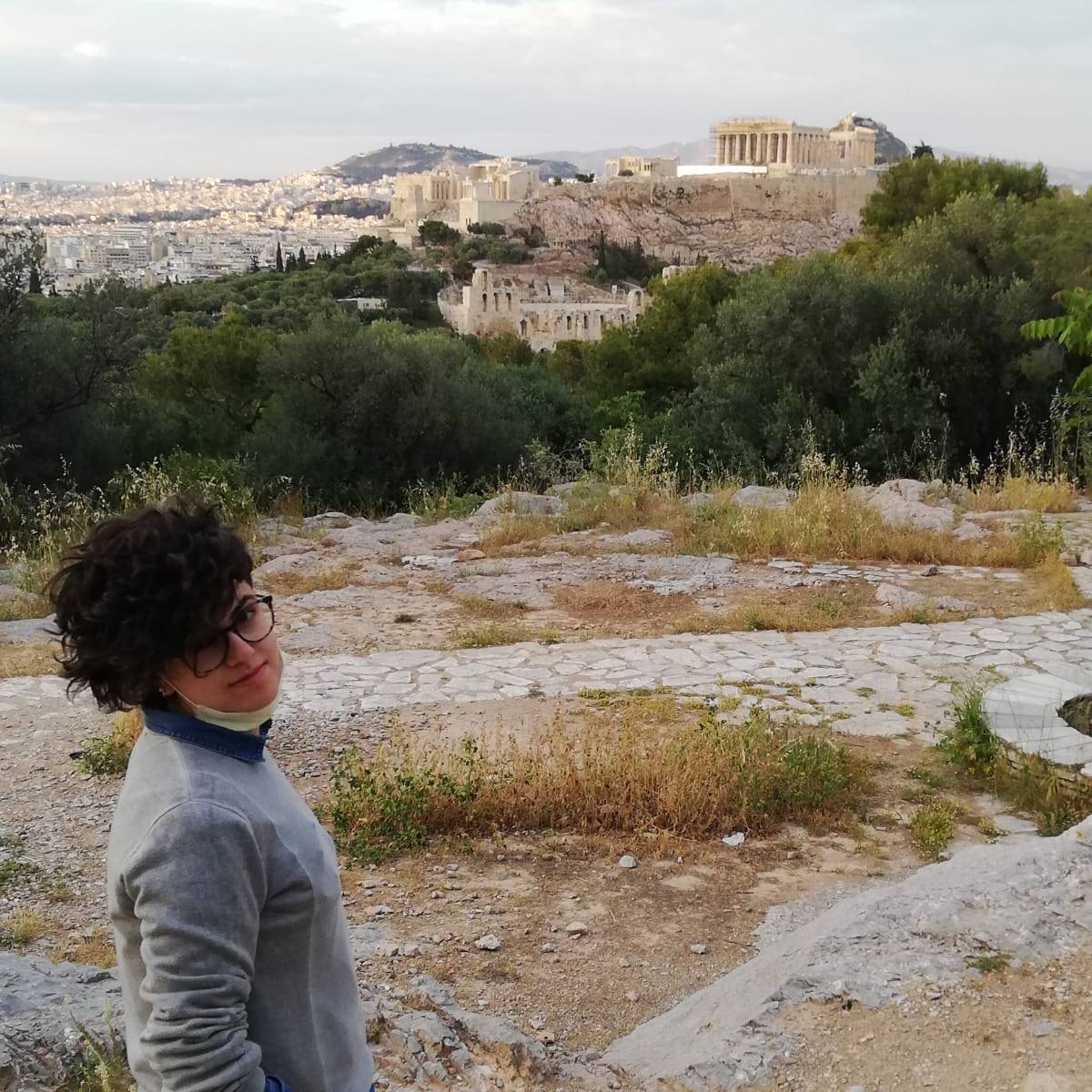 Chiara is an alloy, the perfect fusion of easy-going amicability and seriousness. Her short laughs beckon to the nights of aperitifs at the Paganico bar, making fast friends with the townspeople and the family of our host, Luca Giannuzzi-Savelli; it is easy to imagine Chiara staying up in revelry as the sun wanes. At the same, these same laughs betray a shyness in her and a deep humility, often arising in our interview when the headstrong scholar sought to temper her own praise. More than a duality, these seemingly differing traits translate into a tremendous depth of character that manifests in her care for others and that, in turn, drives her passion for her work.

Chiara grew up in Messina, Sicily, where her childhood was spent under the open air of an endless sky and a world filled with ledges, nooks, and crannies to climb upon; she did not need television or computer screens in order to pass her time. Although she left the sea-scent of Messina in order to pursue archaeology at Siena, the experiences in the field that she so loves within this discipline remind her of these early days, surrounded only by nature, so removed from everything amid the stretching fields. Indeed, Chiara knew that archaeological research was her path since she was a child, attending high school focused on the humanities (liceo classico) with this later goal in mind, yet her youth was not solely occupied by the dream of excavation. She recollected drawing and painting with her mother when she was little as well as her foray into artistic glass work; she remembered the acoustic guitar that she took up in high school and played for five years as well as the pleasure of singing alongside the strumming of its strings. Chiara told me about the sports that she used to play, namely tennis, which she left back home in Sicily when she moved for university, and of the boat rides that she once enjoyed. There were many times in her life that she thought about following a different road, but “alla fine [in the end],” she explained, “il sogno presenta sopravvento [the dream prevails]” — her lifelong interest in history and, later, her particular fascination with architecture were victorious in her heart, and Chiara chose the life of an archaeologist above all else. Nevertheless, she keeps close these joys of her younger years, which live on in her appreciation for modern art and music: she surrounds herself with the colors of Klimt and Gauguin in particular, and one day, Chiara intimated, she just might pick the guitar back up and breathe new life into this love.

When she first delved into the world of archaeology, Chiara was not sure of what the work would entail. She had to adjust to the difficulty of the labor, toiling each day beneath the sun, and the unfamiliarity of the approach, but by her second or third excavation, she began to understand the methodology, and her passion was confirmed, which helped her to persevere and press onward. Thus, despite what she might have ‘left behind’ back home, Chiara is thankful for the road that she has embarked upon. By the moment of our interview, she had attended the University of Siena for five years, completing her bachelor’s degree and working towards her master’s degree here; her focus has primarily been on Greco-Roman architecture, narrowing even within her bachelor’s degree to Roman constructions, with her thesis investigating the architecture of the Roman agora at Athens.

Regardless of the uncertainty of the road ahead, Chiara is satisfied with her college experience. It was this institution, in her view, that permitted her to do significant work, as it not only thoroughly prepares its students with field and laboratory training but provides avenues to work with researchers who hold varying points of view and to engage with different contexts, even outside of Italy. It was the University of Siena, in fact, that sent Chiara off on her very first dig. From the moment that she began her education here, she started to dig on Elba Island alongside IMPERO’s Dr. Edoardo Vanni. Since it was her first excavation, Chiara feels attached to Elba Island above all else, and the site itself reinforces her sentiments: She told me of the beauty of the water that the students would dip into after a long day’s work, the warmth of the little town, and the incredible contexts beneath the ground; according to Chiara, Elba Island lent the kind of memories that one remembers forever, and it will remain a place that she always wishes to go. Since this time, Chiara has experienced many excavations, both Roman and Medieval, through Siena and even twice with the University of Messina, reaching back home. It was at Elba’s excavation, however, that Chiara forged a group of friends that would last for the length of her schooling and that would lead to this past summer at Podere Cannicci; in fact, not only did Chiara work at Cannicci alongside her longtime friends, but it was Edo who led her there.

Chiara described for me the beauty of Monteverdi, nestled high among the hills and so far from urban centers, and the wonder of Cannicci’s unique and significant contexts. This was especially felt, the student attested, by that group of friends, as they had already conducted so much work in the Grosetto area through the University of Siena and therefore could deeply appreciate what they found. Furthermore, their comradery had a direct impact on the quality of their work at Cannicci and elsewhere, such as at Populonia and Roselle: working with people that one knows, according to Chiara, brings a powerful harmony to an excavation, striving and succeeding together; when there is tension within an excavation, the work itself deteriorates, and thus this rapport is fundamental for a site. Still, it does not take years for this comradery to form, and Chiara cited the students’ ability to foster interconnections even when they did not exist on their very first dig at Elba as well as the equitable beauty of, as she did last year, joining an excavation where not a soul is known beforehand, forging new friendships and learning new ways of doing. Just as she was when groups formed to play in her schoolkid days, if others are receptive, this young scholar’s heart is open to embracing fresh bonds.

Human bonds forged in the context of an excavation are, for Chiara, the most important aspect of archaeological work, but the most crucial of connections go far beyond the friendships among one’s peers. Chiara explained that a dig is an investment for the community to which it belongs, and despite what the labor means to those engrossed in it, an excavation is for much more than discovery. The knowledge and finds brought back to the light are to be given to the local people; an end goal of publication alone is, in her opinion, senseless, and disseminated knowledge itself should be made accessible to those outside of the field. In sum, giving back to the people is, for her, the point of excavation, of research itself, and of bringing material back to the light. It is important to keep this fundamental purpose and perspective as the basis for excavation, Chiara explained, and to always keep the community relevant, even after the dig has concluded.

Her emphasis on community was born from her time at Elba Island, from staying in unfamiliar houses and working with school children during the excavation, facilitating educational visits and field trips with the students of the upper elementary and high schools on the island. The children were tremendously enthusiastic to try new things, diving into the educational activities that the archaeologists at Elba facilitated. Their joy reminded Chiara of herself when she was young: she had always been eager to visit excavation sites, and the occasions that it happened imprinted themselves into her memory and heart. To be able to give the children of the town this opportunity was immensely important to her, and as the researcher continues in her career, she hopes to implement this community-focused care wherever she goes.

As Chiara described the attention and interest that Paolo Alberto and Carolina, Monteverdi’s two young tenants, showed in their eagerness to learn about the excavation at Cannicci, it became clear that her desire to direct the excavation’s focus towards teaching others, in particular local youth, has not waned. In this way, her passion for archaeology has a deep, moral fuel, which embeds her practice with seriousness and, by its human element, keeps her warm. Thus Chiara, a person who likes to be precise and systematic in what she does, imprints these values into her archaeological work while remaining one who is understanding and kind, hardly ever growing angry at others. She is open to the lessons that she believes rest in new contexts, further study, and the act of trying new things, and as someone who always seeks to learn and to grow, she appreciates these qualities in others. Even if she feels sometimes out of place wherever she is, remaining true to herself in all contexts and circumstances, Chiara seeks to expand herself and to develop a breadth of knowledge; thus, not only is her research made fuller, but there is no space so alienating that it cannot be learned from.

Chiara is ready for this world beyond Siena’s stones, and she, with her love of travel born from trips with her mother, is eager to expand her experiences abroad past those of London and Galway, gazing even across the sea to Canada and America. Chiara might have cast her dark eyes downward, and a nervous smile might have framed her face as she attempted to qualify her own positive characteristics, but the young student has a heart anchored in solid ground, which will steady her as she embarks into an uncertain future. It is a shoreline formed from the lessons of Elba’s sands, born from the little girl learning to love discovery beneath Messina’s clear skies, whose joy she sees in every eager child’s face.