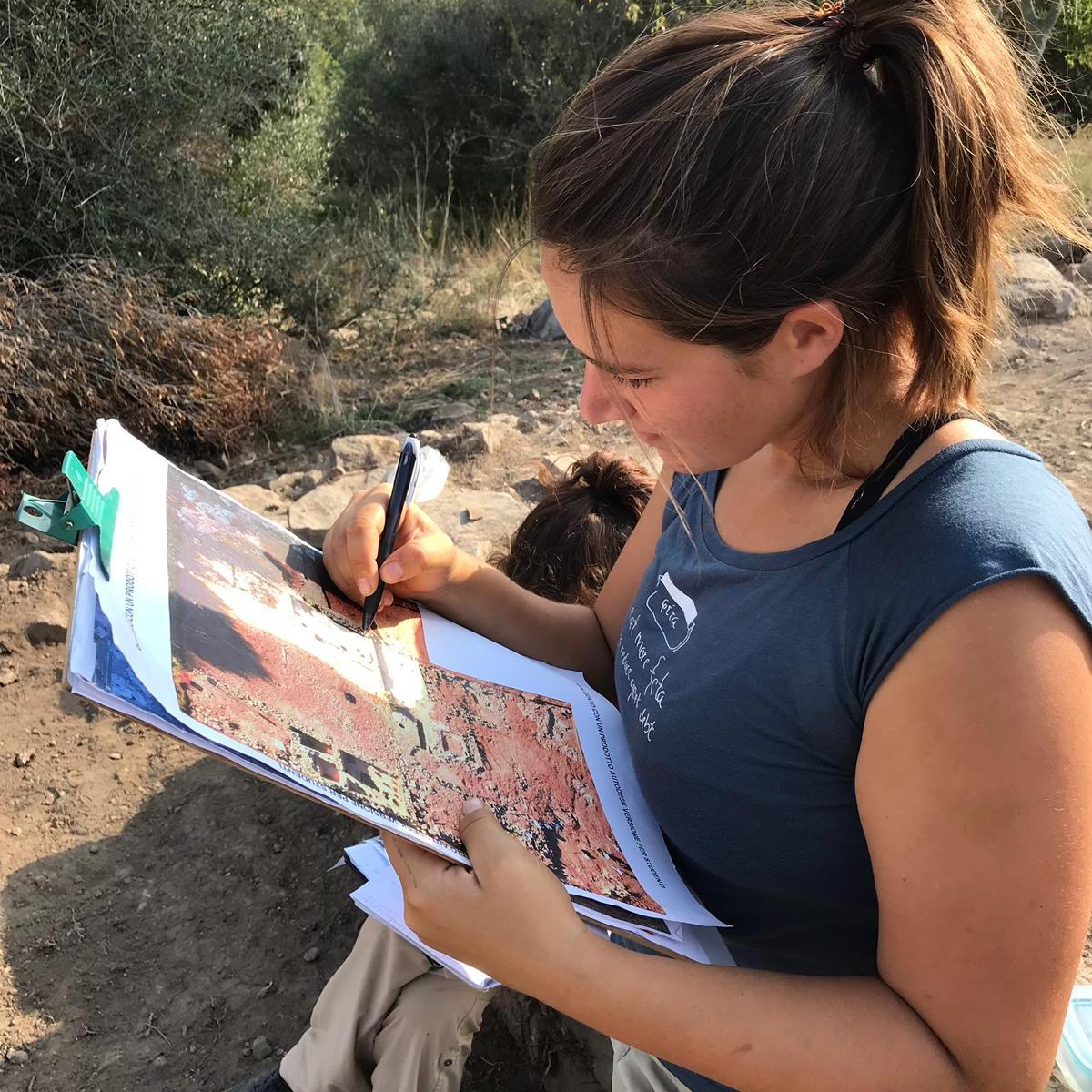 Meeting Benedetta was like meeting an old friend. As she wound her way around English words, her confidence growing with every breath, I heard something in her laughter that I have met before, which brought ease into my own. Despite her outgoing nature, she can be a bit nervous when she first meets someone new, but as she comes to know the person, her voice rising excitedly as she explained, she sees their positive aspects, and a friendship blossoms. It is characteristic for Benedetta to see the good in those around her, and she readily respects those who display maturity and seriousness on site, who can put the work first and leave the outside world aside. Further still, she is drawn to curious minds and to those who are true to their word, as well as those who show their true colors without deceit. At Cannicci, she explained with gratitude, everyone was open and honest in this way.

Benedetta was in the midst of the excavations at Caldanelle when we spoke, passing from Cannicci’s Roman context to those Medieval ruins near Petriolo. “At Podere Cannicci, it is a little bit different because you have to have more imagination,” she explained, since the structures lie less visibly beneath the earth; nonetheless, Roman sites like our own are the forte of the freshly graduated University of Siena student. Beginning first with Etruscan excavations during her bachelor’s degree at the University of Perugia, studying this period for her five years of work at Tarquinia alongside fellow Cannicci-excavator Alessia, Benedetta went on to dig at Roselle and other Roman contexts and to research this era at the University of Siena. In the past year, concluding her research at the institution, she developed her focus on Roman architecture in Morocco, and she seeks to delve into the development of Roman architectural models in the empire’s North African province as she continues her studies elsewhere. Having just finished her master’s this past June, Benedetta will first conclude her summer digs and then prepare for her upcoming examinations, but afterwards, she has her sights set on her next academic step: “It’s very ambitious,” she said as she described some of the graduate schools that she hopes to enter, as she is aware that she “could fail.” Although she is prepared for such an outcome, enrolling in one of these three-year programs is her “very high ambition,” and the drive that flashed in her eyes as she described her dream seemed to bring its achievement one step closer to reality.

According to the young researcher, Benedetta’s university experience played a large role in the depth and breadth of her experiences, providing her not only with “a very full immersion in this work” but also with the opportunity to meet and to live alongside numerous people who passed on lessons and knowledge, both of which form a major part of life on a dig site. “L’università, per me, è stata un’esperienze importante sia per la formazione sia da punto di vista umana [the university, for me, was an important experience both for training and from a human point of view],” Benedetta continued, and this shared life of working and sleeping side-by-side has blessed her with deep connections that were fostered “in a very short time” and that become stronger with every mutual excavation together. Even at Cannicci, the budding archaeologist was already bonded to most of her peers from their time at Roselle, which allowed the work and their social interactions to come with greater ease: “It’s very beautiful to work with someone you already know,” she elaborated, as the clarity that she is drawn to in strangers has already had the time to flourish and grow.

Aside from the places and people that she has come to know through her education and excavations, the seed of archaeology had been planted in Benedetta since she was small. “My mom in particular … loves history and [the] history of art, so when I was a child, we travelled a lot, and we visited a lot of cities and museums,” she said as she recalled with a smile her parents’ caravan and the “beautiful … memory” of journeying to the south of Italy, to Basilicata, Matera, and Metaponto, over the Easter holidays: “I think that … I took this love [of history and archaeology] from her.” From these adventures with her family, she likewise developed a fondness for the road less travelled, for exploring the places to which people do not normally venture, as well as a love of the region that she wishes to study; indeed, a trip with her parents and brother to Morocco, she attested as she recalled the Roman sites and cities that they ventured to, is perhaps her fondest adventure. Even in the stressful moment of getting lost on the jagged roads of a mountain pass, Benedetta considers herself “very lucky” to have seen the loveliness of this “secondary road” upon which, she thinks, it is unusual for Europeans to go. As this explorative spirit, having already travelled as far north as Sweden and as far south as Morocco, told me of the places that she has gone to and that she wishes to see, I taught her the English phrase “off the beaten path” that her memories embody, which captures the curiosity in her soul.

Ultimately, Benedetta hopes to bask in landmarks outside of Europe, with her eyes set on journeying as far west as Mexico someday as well as to “Egypt, Iran, Iraq … the Middle East” at large. In particular, she feels called to the Roman sites of Syria as well as to those along Turkey’s coast, hoping to find the time to venture to those places “less famous … for [those] that study in Italy” as she continues her schooling. Even in her studies, however, Benedetta is grateful: “I am very happy because I am doing what I want to do,” she told me, since her dreams “more or less … all [revolve] around archaeology”; as her education continues, she will have the opportunity to research further “the Arabic history and culture” that she “fell in love with” in Morocco.

While Benedetta’s enjoyment of cooking, swimming, practicing French, and playing with her water polo team likewise gives her a structure that bolsters her as a student and excavator — lending her “a rhythm” that has taught her to organize her time — Benedetta finds her greatest ease beneath the water’s swell and alongside genuine, amicable people. It is this connectivity that follows her, whether she finds herself in Athens just a step over the sea or exploring the ruins of the Middle East; regardless of the road ahead, the reality of rocks that grace her fingertips will always be better spent with hearts that showcase that same truth — among which she can lean back and laugh, wholly and joyfully herself.